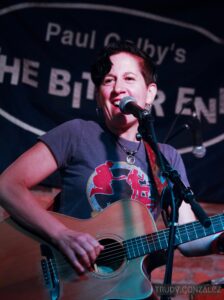 Lisa has performed her original music at a variety of venues and notable festivals in the US, often with her sister Lori Brigantino, also a vocalist and multi-instrumentalist.  In addition, the two sisters also perform in “The Vickie & Nickie Show” a wacky, self-contained theatrical musical/comedy act where the real life sisters portray Vickie & Nickie – the multi-instrumental, singing housewife sister duo straight from the hills of Northern Minnesota.  Lisa has released several singles and three full-length albums original music co-produced with her husband Thomas Millioto, her latest being the critically-acclaimed album I’ll Waltz Before I Go, an eclectic collection of original songs ranging from Folk to Rock, Old-Time, Americana, Pop and more. ‘Round Magazine says ”Nearly every track is a standout…This is a stunner of an album.”

Lisa was an original member of Lez Zeppelin, the world’s first all-girl Led Zeppelin tribute band and toured internationally with the band playing bass, bass pedals, mandolin and keyboards at A list venues and festivals around the world including Bonnaroo in the US. Lisa left the band in 2009 to focus on her original music.

Lisa Brigantino is proud to be a Kurzweil Endorsed Artist. She is a member of SESAC, The Songwriters Guild of America, The International Singer Songwriters Association, Inc., New York Women in Film and Television, a voting member of NARAS (Grammys) and is a past board and advisory board member of Women In Music, Inc., an international non-profit organization.   For more information, visit www.lisabrigantino.com